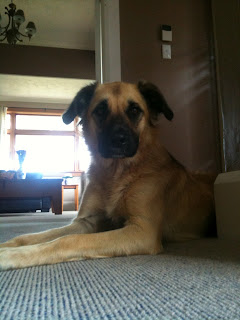 One week ago we had to put down one of our dogs, Bob. Bobby was 3 and a half and has, for the past 11/2 years suffered severe anxiety due to the earthquakes that have been hitting our city since Christchurch 2012. We adopted bobby from the SPCA when he was a puppy and he was always a sensitive and anxious- natured dog but since the earthquakes he has become increasingly worse. He started barking all day, escaping over our 6 foot fence, having panic attacks and being on edge, We took him to the vet multiple times and tried herbal and prescription medications, anxiety behaviour methods over the course of months or weeks, we tried doubling his exercise to twice daily, a plug in pheromone medication for anxiety in dogs, and a mix of stronger medications until we finally had to put him on the strongest anxiety medication for dogs-comiccalm. In his last few weeks, we were having to put him in our garage during the day (which is warm, dry and comfortble) as his escaping was getting impossible to control and we couldn't leave him alone at all. He then started self mutilating by licking obsessively and scratching to try to escape and had lost weight from using up so much energy in his anxiousness. After another trip to the vets he came home medications for his wounds, a cone to stop him licking and a (humane) bark collar to stop him licking. I contacted an animal behaviour specialist who told me she could not help him if the medication didn't work as his anxiety was so extreme. After 2 weeks on this medication and the come and bark collar, his anxiety was still getting worse and we came home one day to find he had torn off his cone and bark collar and had scratched his paws so badly there was blood everywhere all over the garage. He was in an absolute state and we were so distressed we knew we couldn't do anything more for him.
The next night, after many many tears and vet consults, we took Bobby to the vet and sent him to doggy heaven. It was the worst thing I have ever had to do and the hardest decision to make, but we knew we could not do anything more for him and he no longer had a quality of life.
We miss him terribly but we know he is at peace now and isn't suffering anymore.
Mummy and Daddy and Toto will always remember and love you Bobby xxxx
BLV
Posted by Boo Love Vintage at 1:03 AM 3 comments:

Boo Love Vintage
I live in Christchurch, New Zealand with my husband, our wee newborn son Romeo, and our beloved animals; They are Toto the bischon-poodle cross,and Thumper and Foofoo the bunnies. I love all things old fashioned and vintage.