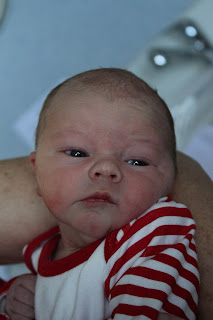 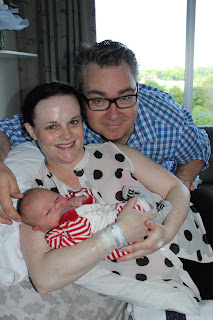 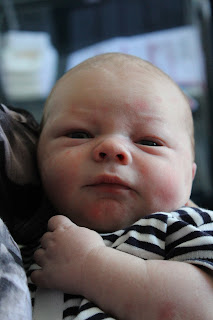 On Tuesday 20th November at 7:45pm I gave birth to our son, Romeo Dean Eason!!!!
It was a 16 hr labour that ended much more abruptly than expected when I arrived at the hospital to have an epidural after 15 hrs of labouring but not dilating quickly enough. Just as the anaethetist arrived I had the urge to start pushing and what we thought was going to be another 8 or so hours of labour ended up finishing an hour later with our little boy in our arms delivered naturally without pain relief! Our wee man had the cord wrapped around his neck at birth so he was checked over by a number of doctors before they handed him to us which was terrifying but he was doing well and weighed a healthy 7.10Lb.
After a cuddle and Romeo's first feed I was taken away to surgery to repair tearing that had occured during the birth and then my beloved and I had time to cuddle and kiss our wee man. Romeo and I spent 3 days in hospital before transferring home.
Romeo is doing really well and we are having such an incredible time getting to know him and learning how to be parents. I still can't quite believe we have him and he is is ours to keep!! We are absolutely smitten with him. Joy!!

Posted by Boo Love Vintage at 5:26 AM

Boo Love Vintage
I live in Christchurch, New Zealand with my husband, our wee newborn son Romeo, and our beloved animals; They are Toto the bischon-poodle cross,and Thumper and Foofoo the bunnies. I love all things old fashioned and vintage.